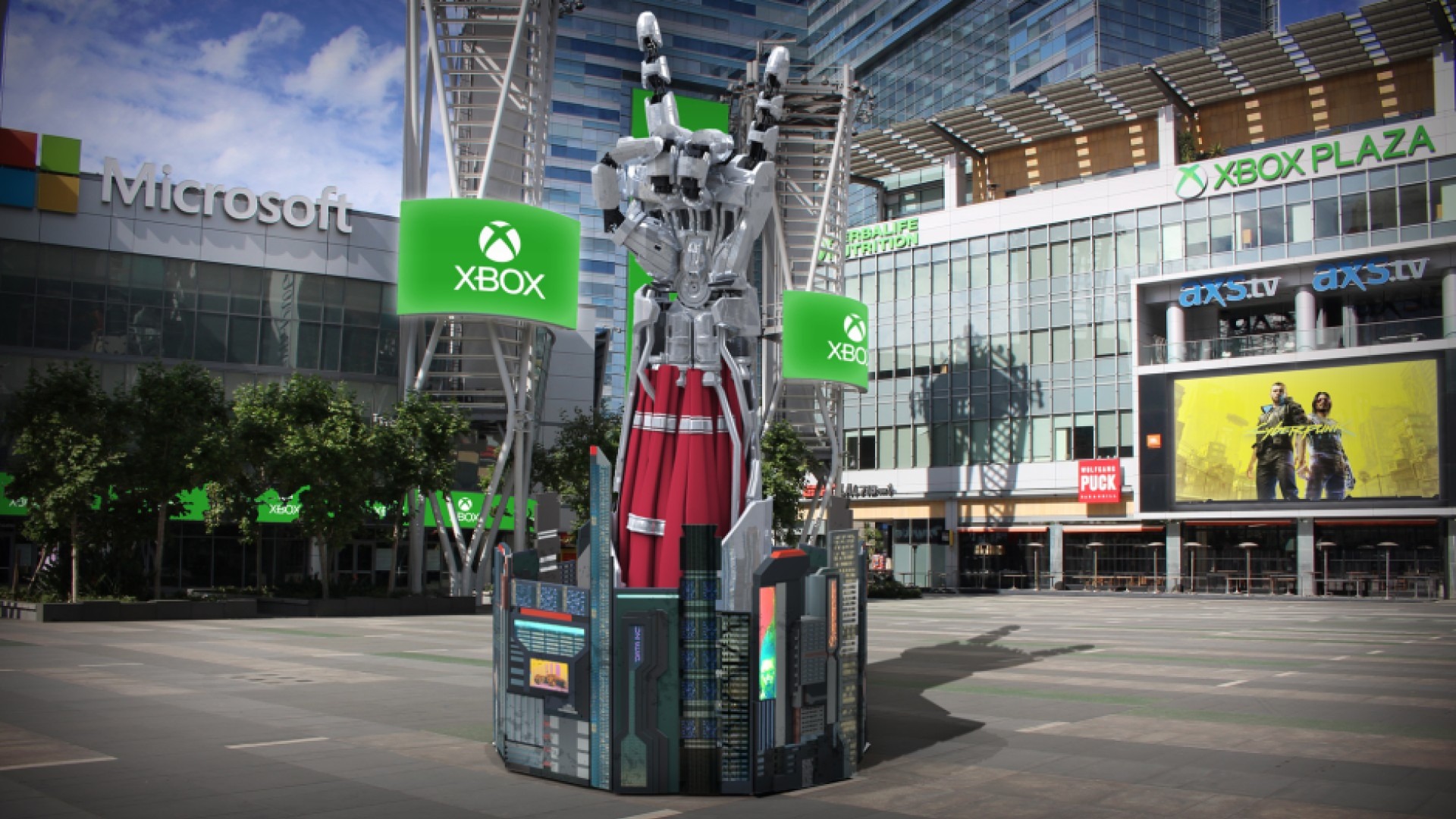 Next week, gamers around the world will be able to jump into the next generation of gaming with the release of the Xbox Series X and Xbox Series S. We’re very excited about the launch of our latest and greatest consoles, and used it as an excuse for celebrations, both live and virtual, around the globe. Don’t have that new console yet? Not to worry – you won’t need one to join us as we kick off the next generation in style!

The biggest of our launch day events is our official livestream, which gives us an opportunity to celebrate and connect with our fans by doing what we all love to do: play games. On November 10, we’re inviting all Xbox fans around the world to celebrate, connect, and play together. So grab your device of choice and play alongside Team Xbox, your favorite creators, and our partners, right from your homes around the world. You’ll get to take a closer look at the next generation of games, hear the stories of people who make them, and play along with them.

We invite you to tune in to our global livestream in celebration of play on November 10 at 11 a.m. PT / 2 p.m. ET on YouTube, Twitch, and Facebook Gaming.

We’ll also be highlighting some of the member of the Xbox community, with testimonials from Xbox Ambassadors, MVPs, Xbox FanFest attendees, and our very own Team Xbox members about what this moment means to them.

Cyberpunk 2077 fans won’t want to miss Johnny Silverhand’s induction into the Xbox Walk of Fame. To celebrate the occasion, viewers will be able to control a 20-foot replica of Johnny’s iconic Silverhand live during the stream, using nothing but emojis.

We’ve also got a special treat for fans who attend our virtual FanFest. Login or Register as an Xbox FanFest fan at https://www.xbox.com/fanfest and opt-in for a chance to win exclusive prizing such as a custom Xbox Series X Fridge, Xbox Series X and Xbox Series S.

During the livestream, we’re partnering with our friends at Make-A-Wish International to support communities around the world through SoftGiving. We’re bringing back #GiveWithXbox, and starting at 11 a.m. PT / 2 p.m. ET on November 10, every donation made to Make-A-Wish International during the livestream will automatically enter them for a chance to win a Game Pass Ultimate 3-month subscription or one of three HyperX Cloud Alpha headsets. For more information and to join in giving back to families, please visit the event donation page.

Finally, while we can’t be together in person, we will bring our fans together virtually. Fans will upload a selfie to create our launch fan mosaic, with the final image being revealed during the livestream.

Xbox Launch Celebrations Around the World

In addition to the global launch livestream, we’ll also have a number of events kicking off around the globe that fans can participate in. These include:

New Zealand: Due to international time zones, New Zealand will be the first country to globally celebrate the launch of the Xbox Series X and Xbox Series S. Xbox ANZ is hosting a livestream countdown for its fans on both sides of the Tasman in Australia and New Zealand, as well as across the world. The live event will begin at 11 p.m. NZDT on November 9 and continue through midnight to officially usher in the next generation of gaming. An official Xbox takeover will also take place during the stream, where Queenstown will be transformed into ‘Greenstown’ to officially launch the Xbox Series S and Xbox Series S. Fans can tune in via Xbox ANZ’s Facebook, Twitter, YouTube and Twitch.

France: On November 9, Xbox France will host a local livestream event, Xbox Dream Live. From 6:00 p.m. to 8:00 p.m. CET there will be a celebration with the community on Xbox France’s Twitch and Twitter, including Q&A, contest for prizes, and more. From 8:00 p.m. to 1:00 a.m. CET on November 10, the Xbox team will celebrate the new generation of gaming with takeovers from game streamers and entertaining activations.

Germany: Xbox Germany will celebrate the launch of Xbox Series X and Xbox Series S with the Xbox Dream Stream event on November 9 at 7 p.m. CET on Xbox Germany’s Facebook, Twitter, TikTok and YouTube. Join the digital party with the local German, Swiss and Austrian gaming communities to celebrate the transition into the next gen with a spectacular livestream full of highlights and surprises.

Sweden: Xbox Sverige (Sweden) invites the world to tune in at 8 p.m. CET to Xbox Sverige: Launch Night Live as we bring a show packed full of content to celebrate the arrival of Xbox Series X and S. In partnership with DreamHack and Elgiganten, along with a roster of other amazing partners, the stream will serve to showcase every part of the next generation of Xbox gaming – from console, to PC and Mobile. Additionally, viewers are invited to preview games that are playable at launch, along with some special guests throughout the show. Be sure to tune in for all this and some exciting prizes to be won.

UK: At 6 p.m. GMT on November 9, Xbox UK and Xbox On will host a six-hour livestream, counting down to launch at midnight. Viewers are invited to preview games that are playable at launch, complete live interactive challenges, all while experiencing a spectacular installation that will be featured throughout the show. The rooftop display, set against the backdrop of London’s iconic skyline, will feature a countdown that will begin two minutes before midnight and includes a holographic installation to showcase the innovative features of the Xbox Series X.

Brazil: The Next Gen is Now two-hour streaming event will begin at 5 p.m. BRT on November 9. Catering to the local Xbox community in Brazil, the livestream is hoping to engage tech enthusiasts as well as casual and hardcore gamers of the like. Attendees will have the chance to interact with the stream in real time and decide what will be shown, whether it be an unboxing, gameplay with content creators, trailers (Cyberpunk 2077 & Assassin’s Creed Valhalla) or an extended view of the new console features for the Xbox Series X and Xbox Series S.

Mexico: Xbox Mexico will welcome the next generation of Xbox gaming during a live stream event on November 9 at 7 p.m. CST. This digital event has been inspired by the dreams of the Mexican community and will be packed with great surprises, fun dynamics, important announcements, and appearances from influential gaming opinion leaders and content creators throughout the country.

Canada: In Toronto Ontario, Xbox Canada will usher in the Xbox Series X as we Power Your Dreams through a showcase of local artists’ dream interpretations depicted on a 40 ft console floating in the Toronto Harbour on November 9 and 10, in a nod to the iconic Xbox Series X reveal from last year’s Game Awards. Stay tuned to @XboxCanada and @Xbox for more information.

United States: A mysterious 40 ft monolith appearing in the dreamlike landscape of Washington State USA, in a nod to the recent Xbox Power your Dreams campaign creative. It will feature local artist’s dream-work imagery. The structure and it’s ever-changing content will be featured in companion streams, social content and giveaways hidden throughout the day. We will also make select artwork available to fans digitally following launch. Stay tuned to @Xbox for more information.

Tune in to the global livestream in celebration of play on November 10 at 11 a.m. PT / 2 p.m. ET on YouTube, Twitch, and Facebook Gaming.