I find it kind of frustrating when you play a good game and you look at the score to find out you died the least, got more kills, and more assists than all the players, but end up in 2nd?
Now I’m sure someone walked in front of me while I was shooting the enemy ;) and that dropped a few points but what bothers me is there is no credit for not “giving” up points by dying as much.
If  you died 10 times more than I did you gave the other team 1,000 points, that should count for something. 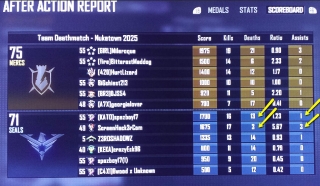 I have had games where someone in first went 24 and 33 and they are in first while the rest of the team had an almost even KD average of 1 and nobody died more than 18 times.
It just doesn’t make any sense to me, hey Activision do you think we can come up with a different formula?