Seven Arguably Interesting Facts About Arcade Spirits, Out Today on Xbox One Arcade Spirits is a narrative game in which you live in the year 20XX, an alternate time line in which the game industry crash of 1983 never happened. Arcades never stopped being popular. You take up a post working at the Funplex, a tiny arcade run by a nice old lady named Miss Francine, and get to know your co-workers and gaming regulars alike. You’ll solve problems, make friends, build up your arcade, and perhaps find romance along the way.

To celebrate the launch, here are what are very likely seven facts about Arcade Spirits that you need to know! Presumably!

Hey, you know how in romance movies they have this huge slow burn leading up to the big moment where love is confessed, and then the music swells and they kiss and the credits roll and everybody tosses out their empty popcorn containers and goes home?

Nope, sorry, real life doesn’t end there and neither does our story. Once you’re in a relationship, you’ve got a lot ahead of you. Conflict! Arguments! Making up! Making out! Not to mention furthering your career and making sure you find your dreams during strife and turmoil. Get ready for a wild ride.

Along the way, your personality will be measured along four attributes – Kindly, Quirky, Steady, and Gutsy. The choices you make and the people you grow close to will determine what sort of person you are, and that plays into the finale. If you beat the game as a Kindly sort of person, why not try a second run as a Gutsy and ambitious sort? See where that leads you.

Ever play one of those games where you pick “eat toast” instead of “do exercises” and promptly get hit by a bus? Yeah, that’s not us. We want you to feel free to express yourself and make the decisions you want without living in perpetual fear of those giant red Game Over letters humiliating you. Don’t be scared to color outside the lines a little with your choices!

Seriously, it’s a joke musical cue that pops up in like two different scenes in Arcade Spirits and I had to download three pieces of some dodgy MIDI software just to rearrange the file to sound synth-y. And my first attempt had everything mapped to the accordion, which was nightmarish but not quite the sort of nightmarish I was going for. Man, game dev is weird. You would not believe some of the hoops you jump through to– wait, where was I? Oh, right, seven facts, sorry. Next one!

“Wait a second, there’s only six people on the box,” you may say. And you’re correct! There are six romances… plus a single hidden one, which you can find if you meet the right conditions. What are those conditions? Who knows? It is a mystery! You’ll just have to find out. Or, I don’t know, use a search engine. I mean, that works too.

In Arcade Spirits, you design your character and you choose who you want to romance. Name yourself, pick your pronoun, restyle your hair, whatever floats your boat. Be whoever you want to be, love whoever you want to love. The game won’t restrict you. You can play as yourself, no matter who you are. It’s a game for everyone and we’re proud of that fact.

Seriously, now! Right now! You can stuff fistfuls of hard currency directly into your Xbox One and out pops a video game! I mean, I think that’s how it works. I’m not an economist. But the point is… if you’re ready to work in the arcade of your dreams, defending your business against cutthroat competition and supporting your friends along the way, Arcade Spirits is for you. And we’ll be ready and waiting for you. Put your quarter up. 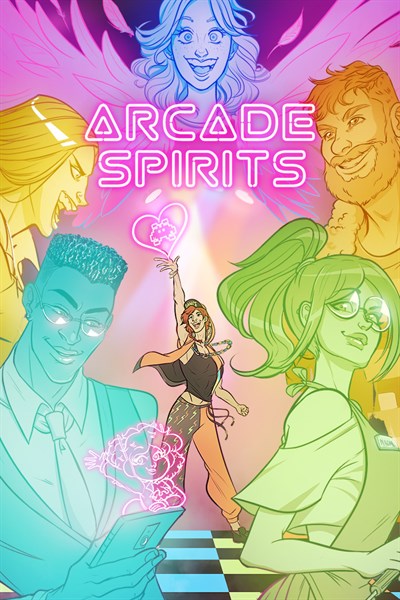 ?????
4
?????
$19.99
Get it now
Xbox One X Enhanced
What if the 1983 video game marketing crash never happened? Set in 20XX, Arcade Spirits is a visual novel romantic comedy with a different history, where arcades still reign supreme as the ultimate place to play. After a period of turbulent employment, your character starts an exciting new job at the Funplex: a popular local arcade with a team of staff that are as eccentric as the customers.

Related:
Next Week on Xbox: May 12 to 15
Join the Fortnite: Party Royale Premiere Party This Friday on Xbox One
May Just Got Better for Xbox Insiders