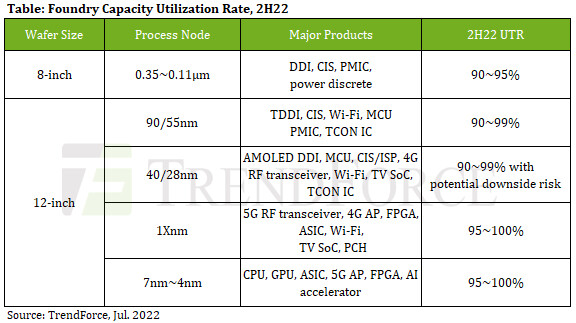 According to TrendForce investigations, foundries have seen a wave of order cancellations with the first of these revisions originating from large-size Driver IC and TDDI, which rely on mainstream 0.1X ?m and 55 nm processes, respectively. Although products such as MCU and PMIC were previously in short supply, foundries’ capacity utilization rate remained roughly at full capacity through their adjustment of product mix. However, a recent wave cancellations have emerged for PMIC, CIS, and certain MCU and SoC orders. Although still dominated by consumer applications, foundries are beginning to feel the strain of the copious order cancellations from customers and capacity utilization rate has officially declined.

Looking at trends in 2H22, TrendForce indicates, in addition to no relief from the sustained downgrade of driver IC demand, inventory adjustment has begun for smartphones, PCs, and TV-related peripheral components such as SoCs, CIS, and PMICs, and companies are beginning to curtail their wafer input plans with foundries. This phenomenon of order cancellations is occurring simultaneously in 8-inch and 12-inch fabs at nodes including 0.1X ?m, 90/55 nm, and 40/28 nm. Not even the advanced 7/6 nm processes are immune.

Capacity utilization rate unbound, resources effectively allocated, material mismatch issues eased
According to TrendForce research, the capacity utilization rate of eight-inch nodes (including 0.35-0.11?m) may decline the most. Products utilizing these processes are primarily Driver IC, CIS, and Power-related chips (PMIC, Power discrete, etc.). Among these products, Driver IC has been directly impacted by cooling demand for TVs and PCs, reflected by the most severe downward revision of wafer inputs. At the same time, the supply of PMICs, which was still tight in 1H22, gradually achieved greater equilibrium after the redistribution of production capacity.

However, as demand continues to fall in 2H22, inventory adjustment has also begun for consumer PMICs and CISs. Although there are still demand backstops for PMICs and power discrete originating from servers, automotive, and industrial applications, it is still difficult to make up the difference generated by driver IC, consumer PMICs and CISs order cancellations and the subsequent decline in the capacity utilization rate at some 8-inch fabs. TrendForce believes that the overall capacity utilization rate of 8-inch fabs will be roughly 90~95% in 2H22, while some fabs manufacturing a greater proportion of consumer applications may have to fight an uphill battle to maintain production capacity at 90%.

The same situation has also occurred in mature 12-inch processes. However, since 12-inch products are more diverse and their production cycle generally takes at least one quarter, coupled with upgrades to some product specifications, trends such as process transition have not been affected by broader short-term economic fluctuations. As a result, overall production capacity utilization rate can still be maintained at a high operational watermark of approximately 95%. Compared with operating rates that easily hit 100% in the past two years, production line operation has gradually normalized and stabilized, demonstrating a steady balancing of resource allocation.

Looking forward to 2023, TrendForce believes, after nearly two and a half years of chip shortages, cooling of consumer product demand will ease the capacity utilization rate of wafer foundries in the short term and applications that were starved for chips in the past are now able to obtain a reallocation of resources. The penetration rate of related applications such as 5G smartphones and electric vehicles has increased year by year while the stocking momentum of 5G base stations, infrastructure in various countries including automated security inspection measures, and server demand from cloud services will continue to support the capacity utilization rate of foundries at a level roughly above 90%. However, some manufacturers that mainly produce consumer products may see capacity utilization rate fall below 90%. At this time, foundries must rely on their own internal diversified planning and resource allocation of product applications to overcome the inflationary crisis of component inventory adjustments.