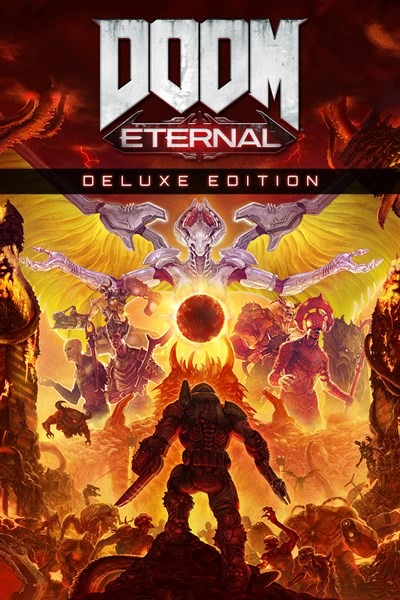 The legions of
Hell threaten humanity’s survival, but there is one last hope for mankind
against Hell’s ferocious armies – the only thing they fear…is you.

In Doom Eternal, take back Earth and save humanity as the Doom Slayer, the ultimate threat to all demonkind. Wield a fearsome combination of powerful weapons, equipment, abilities and sheer force across Earth, Hell and beyond in an epic single-player campaign featuring id Software’s trademark fast-paced, push-forward combat and head-banging metal score.

Players are fully
empowered to take what they need from their enemies to stay in the fight. Use the
Chainsaw for an infusion of ammunition for your weaponry. Set enemies ablaze
with the Slayer’s new Flame Belch to refill armor. And of course, finish off
weakened enemies with a brutal Glory Kill – replenishing your health in the
process. In short: You are the Doom Slayer. The demons have what you need. Go
get it.

Beyond Doom
Eternal’s campaign, hone your slaying skills to perfection with in-game events,
collectibles, multiple difficulty modes and Master Levels – remixes of campaign
levels that bring a fresh new challenge for players at any difficulty level.
There is a ton of content to rip and tear into!

Slay with your
friends in BattleMode, an all-new 2v1 PvP experience developed entirely from
the ground up from id Software. One player enters the arena as a fully loaded
Slayer, while the other two form a cunning duo of demons. Duke it out in a
fierce matchup of skill versus strategy until one side is left standing.

Things seem dire
on Earth, but all that’s about to change. Doom Eternal is now available on
the Microsoft Store. The Slayer’s time is now.

?????
7
?????
$89.99
Get it now
Hell’s armies have invaded Earth. Become the Slayer in an epic single-player campaign to conquer demons across dimensions and stop the final destruction of humanity.

The only thing they fear… is you.

Experience the ultimate combination of speed and power in DOOM Eternal – the next leap in push-forward, first-person combat.

Take what you need from your enemies: glory kill for extra health, incinerate for armor, and chainsaw demons to stock up on ammo to become the ultimate demon-slayer.

DOOM Eternal also introduces BATTLEMODE, a new 2 versus 1 multiplayer experience. A fully-armed DOOM Slayer faces off against two player-controlled demons, fighting it out in a best-of-five round match of intense first-person combat.

Related:
Cult Classic Doom 64 is Now Available on Xbox One
Celebrate Sea of Thieves’ Second Anniversary This Weekend!
Next Week on Xbox: New Games for March 24 – 27