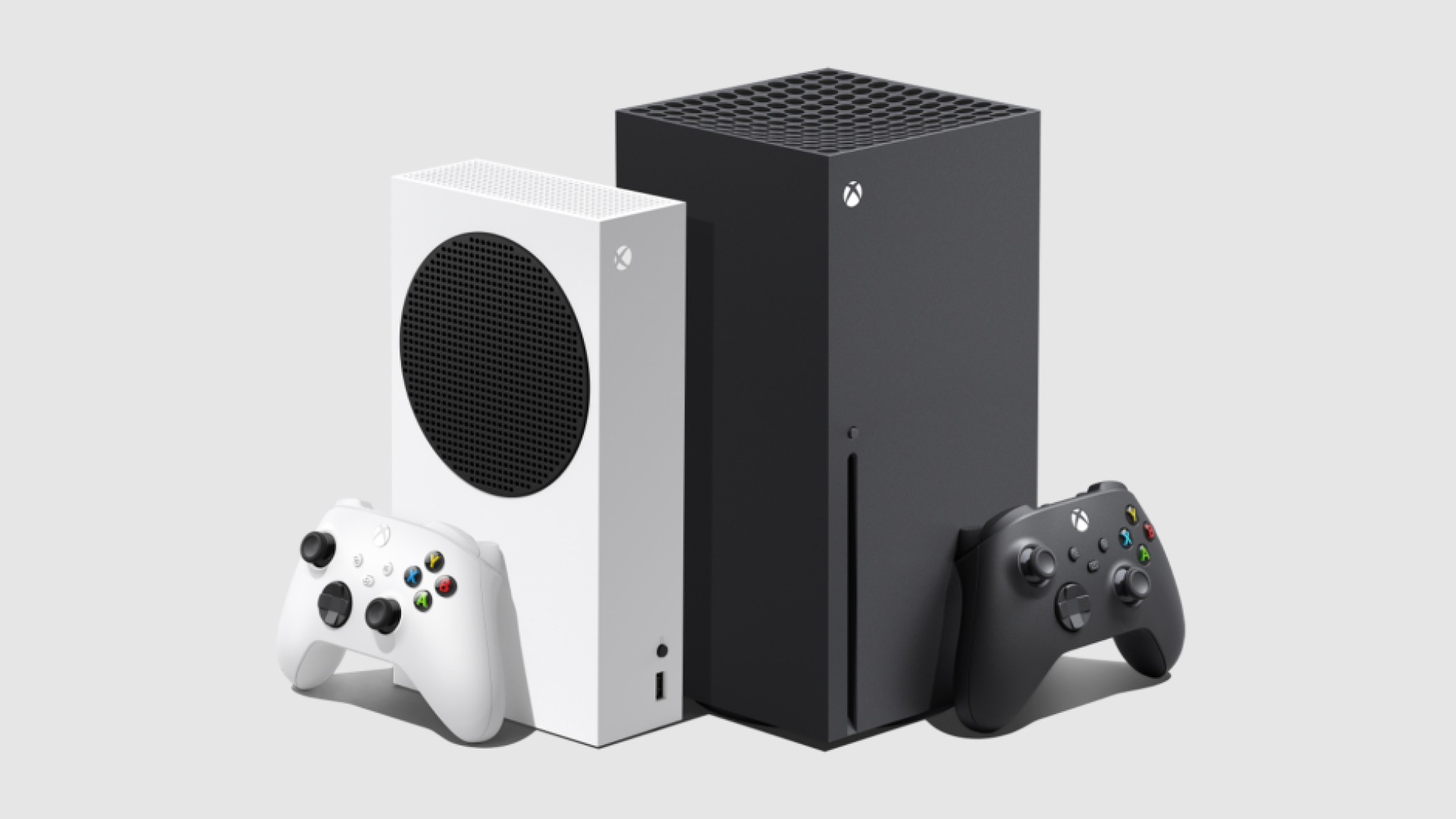 Experience the thrill of gaming at 120 frames per second, with faster loading times, richer, more dynamic worlds and much more on Xbox Series X, our fastest most powerful console ever, and Xbox Series S, delivering next-generation performance at an affordable price in the smallest Xbox ever. Plus, Xbox Game Pass Ultimate membership on console now includes EA Play.

The future of gaming starts today with the launch of Xbox Series X and Xbox Series S, bringing the most performant, immersive and compatible next-generation console gaming experiences to players around the world. The launch of these next-generation consoles is the continuation of our vision of an entirely new future for players – one that puts you and your friends at the center of your gaming experience.

Xbox Series X, the most powerful next-generation console, empowers developers to deliver on their creative visions and dreams. It packs an unprecedented 12 teraflops of GPU power and enables new technologies and features like framerates up to 120 fps, hardware-accelerated Direct X raytracing, variable rate shading, and Quick Resume, which enables players to resume exactly where they left off, across multiple titles, ensuring they can get right back to the fun in an instant. Xbox Series X delivers a new level of fidelity, immediacy, precision and accuracy never before seen in console gaming.

Xbox Series X|S are available in 40 markets around the world today with more to come.

The Best Place to Play the Biggest Games

The launch of Xbox Series X|S heralds a new generation of game experiences built to take full advantage of our fastest consoles ever. Today, when you power on your Xbox Series X|S, you will be greeted by the largest most diverse launch lineup in Xbox history. Games like Assassin’s Creed Valhalla, Watch Dogs: Legion, Yakuza: Like a Dragon, Gears Tactics, and Tetris Effect: Connected will be some of the much-anticipated next-gen games you can play on day one. Xbox Series X|S launch with more than 40 new games playable today, including 30 with Smart Delivery, which will ensure that you always play the best version of the games you own for your console, across generations.

More incredible games are coming to Xbox Series X|S before the end of the year including Destiny 2: Beyond Light launching November 10 (optimized for Xbox Series X and Xbox Series S on December 8) and Call of Duty: Black Ops Cold War launching November 13. When Cyberpunk 2077 launches on December 10, it will look and play best on our next gen consoles and take advantage of Smart Delivery technology, giving you the best version for whatever Xbox console you own.

And there’s plenty more on the way. Xbox Series X and Xbox Series S have been embraced by the biggest names in game development, including our 15 Xbox Game Studios teams, ensuring Xbox Series X|S will power a new generation of blockbuster games for years to come.

Games optimized for Xbox Series X|S will showcase unparalleled load-times via the Xbox Velocity Architecture, heightened visuals and hardware-accelerated DirectX raytracing powered by our custom, next generation GPU, heightened visuals, and framerates of up to 120FPS. These include new titles built natively using the Xbox Series X|S development environment as well as recent blockbuster favorites that have been rebuilt specifically to take full advantage of our powerful new hardware.

Gears 5 is also re-releasing today, fully optimized for Xbox Series X|S with reduced load times, 4K HDR Ultra visuals on Series X, 120 frames per second in Versus multiplayer, variable refresh rate, Quick Resume, and features Smart Delivery for players to have the best version on day one. New content is also available for all platforms, including WWE’s Dave Batista now playable as Marcus Fenix in campaign mode, multiplayer skins being available in campaign for all playable characters, new achievements, and next month’s “Hivebusters” campaign DLC.

Halo: The Master Chief Collection has also been optimized and will boost all Halo games to run at 4K 120FPS on the system, along with improved split-screen play and FOV sliders for the most immersive Halo experience yet. Xbox Series X|S owners will also be able to enjoy campaign co-op cross play with friends on Xbox One, as well as input-based competitive matchmaking across both Xbox One and PC. Additional features, updates and new seasonal content for Halo: The Master Chief Collection will be launched throughout 2021, so there’s no better time to join in the Great Journey.

Playground Games’ Forza Horizon 4, which has been enjoyed by over 24 million players since launch, now features higher fidelity graphics and faster performance, allowing players to zip around beautiful, historic Britain and drive hundreds of the world’s greatest cars in native 4K Ultra HD at 60fps on Xbox Series X. Get behind the wheel faster than ever with quick game resume and dramatically improved load times. With Smart Delivery, the Series X update is a free download to all Forza Horizon 4 owners and Game Pass subscribers.

Xbox Game Pass has fundamentally changed how people play games, and we’re continuing to grow Xbox Game Pass as the best way to discover and play games with family and friends. We want you to experience new ways to play on the console, PC, and your Android mobile device. And to provide the most compelling value in gaming, Xbox Game Pass is the only membership in gaming offering first-party game studio titles day one of launch, so you choose whether to play games as part of your membership or purchase them separately.  With Xbox Game Pass, today, Xbox Series X|S owners have the biggest launch day library of games at their fingertips and all of these games load faster and look even more amazing than ever before.

Starting today, Xbox Game Pass Ultimate members playing on Xbox One, Xbox Series X, and Xbox Series S will receive an EA Play membership at no additional cost. Coming December 15, Xbox Game Pass Ultimate and Xbox Game Pass for PC members will also be able to download and play games from The Play List on EA Play on Windows 10 PCs via the EA Desktop app currently in beta. And some of the best EA Play games will also be available for Ultimate members to play on Android devices via the cloud. In addition to the 100+ games in the Xbox Game Pass library today, Ultimate and PC members can play more than 60 of EA’s biggest and best console and PC games like Star Wars Jedi: Fallen Order, FIFA 20, Titanfall 2 and Need for Speed Heat, as well as titles from some of EA’s most popular franchises like Battlefield, Mass Effect, Skate, and The Sims.

The Most Compatible Next-Gen Consoles Ever

Xbox Series X|S are the only next-generation consoles empowering you to play thousands of games across four generations. Some of the greatest Xbox games of all time look and play best on the new Xbox consoles. We believe that gamers should be able to play all of their games from the past without needing to purchase them again, and they should play better than ever before.

Backwards compatible games run natively with the full performance of the Xbox Series X|S for each and every backward compatible game. This means that all titles run at the peak performance that they were originally designed for, many times even higher performance than the games saw on their original launch platform. These games will look better than ever thanks to improved texture filtering, higher and more consistent frame rates, faster load times and Auto HDR support.

Compatibility is about more than just making sure the games work. It also means being able to bring forward your game saves and progress, your Xbox career and friends, and your Xbox One gaming accessories with you when you upgrade. This process is seamless and straightforward – just pop in your backward-compatible game and go.

Xbox Series X is available now for $499, while Xbox Series S retails for $299. For the latest on where to buy Xbox Series X|S, visit https://www.xbox.com/en-US/consoles. You can also check in with your local retailer, including Microsoft Store, for more information.