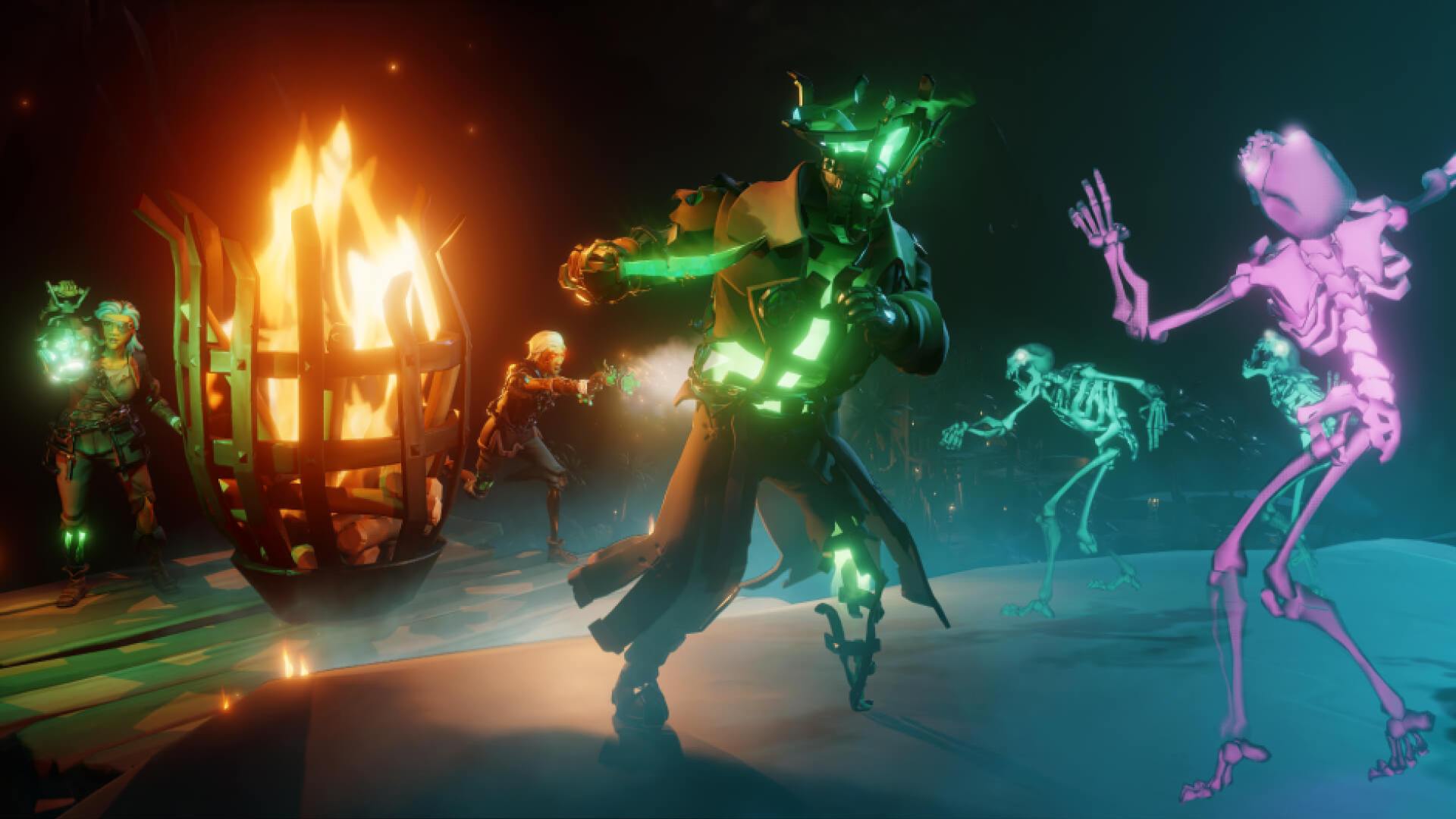 As the nights draw in and pumpkins pop up in unexpected places, it’s time for Sea of Thieves to celebrate the scariest of seasons with its latest free update, available today to all Sea of Thieves players across Xbox One, Windows 10 PC, Steam and with Xbox Game Pass.

This year, pirates will be dealing with a sudden influx of dangerous enemies known as Shadows of Fate – a tricky type of skeleton normally confined to the Fort of the Damned. Working together with the Bilge Rats, players will uncover the story behind this emerging threat as it unfolds week by week, carrying crews into different regions of the seas.

Voyages of the Damned

Nowhere is completely safe during the Fate of the Damned update, as an advancing threat spreads across the seas. Pirates will receive Mysterious Notes before they set out on their adventures, urging them to speak with Larinna outside the tavern to find out what she’s learned, as well as which regions are being menaced by the Shadows of Fate that week – and those places are likely to be a hive of piratical activity, encouraging crews to plan their adventures accordingly.

Larinna will also be offering free Voyages that send players in search of her missing Bilge Rat crews, a task that guarantees some spectral scuffles along the way. Luckily, these same Voyages will give players the knowledge and tools to find the light that can banish the Shadows of Fate. The Ferryman aboard the Ferry of the Damned will also offer advice on how pirates might best defend themselves.

Players who choose to help turn the tide against this invading enemy, or who gather Flames of Fate to celebrate the Sea of Thieves’ traditional Festival of the Damned at this time of year, will find their efforts rewarded in the Fate of the Damned Event that forms part of this update. New Challenges will be unveiled as the Event progresses, each containing a number of varied Goals for pirates to tackle.

As more Goals are completed, new rewards will be made available, including the striking Soulflame weapons and lantern. Pirate Legends who go the extra mile and complete all Challenges will find they have access to the envy-inducing Soulflame Crew Set, available to them and anyone who’s currently sailing aboard their ship!

Last year’s spooky Fort of the Damned update saw a Skeleton Parrot and Monkey find their way into the Pirate Emporium – and not to be outdone, a Skeleton Cat and Dog have just arrived in search of loving owners who don’t mind their pets being a bit on the skinny side. They’re just as loyal as their flesh-and-blood friends, and guaranteed not to leave hair all over the furniture.

Elsewhere in the Emporium, the Soulflame Ship Set is ready to light up the seas with an eerie glow that captures the ethereal essence of the Well of Fates. If you prefer to travel by firelight, you can also acquire the free, irreverent Lantern Dance Emote that helps lighten even the gloomiest moments. Speaking of emotes, there’s a new set that allows your pirate to play the fool courtesy of a skeleton arm that’s a lot less dead than it should be, plus fear-inducing facepaints and plenty more.

New to Sea of Thieves? Join the fun with our Maiden Voyage, a narrative-driven tutorial experience. New players will begin their travels within this scenario – and more tips can be picked up from our online Pirate Academy, which provides invaluable information on topics ranging from sailing to swordplay. Learn more about Sea of Thieves at www.xbox.com/seaofthieves, or join the ongoing adventure at www.seaofthieves.com where you can embark on an epic journey with one of gaming’s most welcoming communities!

Related:
Xbox and Snoop Dogg Unveil the Xbox Series X Fridge
3 Things You Can Now Do in Elite Dangerous on Xbox One
Star Wars: Episode I Racer Comes to Xbox One with Complete Cheat Code Menu