Dig Deeper and Better with These Tips for Deep Rock Galactic

The caves of Hoxxes IV are full of riches and resources worth exploiting, truly a dwarf’s dream. However, some like to call it the most dangerous planet in the galaxy and they are probably not exaggerating. Follow these tips and you will get a head start in your space mining career in Deep Rock Galactic when it lands on Xbox One and Windows 10 PC as an Xbox Play Anywhere title on Wednesday, May 13.

First thing you will notice is how dark it is down there. Luckily every dwarf comes equipped with an endless supply of rechargeable flares. Additionally, the Scout class has a Flare Launcher to reach every corner of the caves. Don’t allow the darkness to surround you, one misstep and you can find yourself at the bottom of a deep pit begging for a fellow dwarf to revive you.

You can destroy all terrain around you, use it to your advantage. Do you have to defend a Salvage objective from a group of Glypid Praetorians? The Driller could remove all obstacles around while the Engineer creates a bridge of platforms to give more space to the team. The Gunner could build a Zip-line as a plan B and some more platforms could block one of the tunnels so no enemies can surprise you from the back. Every mission is a different challenge, use all the tools and weapons at your disposal to improvise and be creative.

The cave systems in Deep Rock Galactic are big, complicated, and always different. It’s normal to feel disoriented sometimes. Just remember that you can check out your Terrain Scanner to get a better idea of where you and your teammates are. The Laser Pointer is another handy tool to bring anything you want to your teammates’ attention. Also, while you are holding the Laser Pointer, you can see outlines around your teammates and some other key items in the level, give it a try.

The creatures of Hoxxes IV come in a variety of shapes and colors. Learn their weakspots and armored areas to land as many good shots as possible. Pay close attention to their movement speed and special attacks. When a wave hits, prioritizing targets is key and knowing that you have to take off the Glyphid Exploders before everything else can make the difference between a successful mission and spending the night at the Medibay.

What can you do with all the precious minerals collected? Many types of Mods can be acquired to improve your weapons and gear. Experiment with different loadouts! Maybe it makes sense for you to sacrifice some of your Flamethrower’s direct damage in favour of sticky flames that will create a wall of fire every time that you shoot the floor. Discuss these options with the rest of your team: since the Scout is bringing his IFG electric field, you can create a killer combo by equipping Conductive Bullets mod to deal more damage to electrocuted targets. Which leads us to…

This is a Team Operation

Cooperation is the heart of the game and, by far, your most valuable asset. Each class shines at solving different kinds of problems. Communicate with your team, combine your tools, and come up with plans together. No matter what happens down in the caves, you will always have each other’s back.

Do you still want to mine on your own? Don’t worry, solo missions are still possible and you will have the faithful drone Bosco to fight by your side.

R and R at the Bar

A miner’s life is not easy. In between missions, don’t forget to relax with your teammates by the bar. Have a beer, show off your dance skills, and kick a few barrels. Minerals sure are shiny, but nothing is as precious as the dwarves we get to meet along the way. Raise your pickaxes together and shout with your comrades to the next incursion into the most dangerous planet in the galaxy. 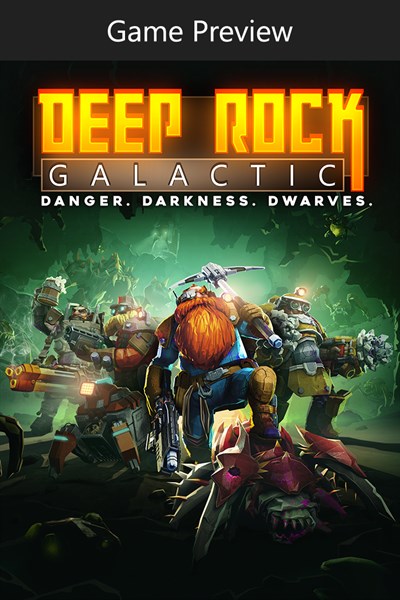 This game is a work in progress. It may or may not change over time or release as a final product. Purchase only if you are comfortable with the current state of the unfinished game.

Hoxxes IV has the highest concentration of valuable minerals ever discovered; however, everything on the planet from the creatures to the fauna is extremely hostile. Good thing Deep Rock Galactic employs the best space miners in the universe: Dwarves! Combining two things Dwarves love most – mining and killing monsters – Hoxxes is the perfect job for any proud, space-faring Dwarf.

*** 4-player Co-Op ***
Work together as a team to dig, explore, and fight your way through a massive cave system filled with hordes of deadly enemies and valuable resources. You will need to rely on your teammates if you want to survive the most hostile cave systems in the galaxy!

*** 4 Unique Classes ***
Pick the right class for the job. Mow through enemies as the Gunner, scout ahead and light up the caves as the Scout, chew through solid rock as the Driller, or support the team with defensive structures and turrets as the Engineer.

*** Fully Destructible Environments ***
Destroy everything around you to reach your goal. There is no set path so you can complete your mission your way. Drill straight down to your objective or build an intricate network of paths to explore your surroundings — the choice is yours. But proceed with caution, you don’t want to stumble into an alien swarm unprepared!

*** Procedurally Generated Cave Network ***
Explore a network of procedurally generated cave systems filled with enemies to fight and riches to collect. There’s always something new to discover and no two playthroughs are alike.

*** High-Tech Gadgets and Weapons ***
Dwarves know what they need to bring to get the job done. This means the most powerful weapons and the most advanced gadgets around – flamethrowers, gatling guns, portable platform launchers, and much, much more.

*** Light Your Path ***
The underground caves are dark and full of terrors. You will need to bring your own lights if you want to illuminate these pitch-black caverns.

Full details on the latest status of the game, how you can give feedback and report issues can be found at https://www.deeprockgalactic.com/

Related:
Indivisible Launches Razmi’s Challenges DLC on Xbox One
Become a Vampire and Experience a Gothic Adventure in Elder Scrolls Online: Greymoor on Xbox One
Shred! 2 – ft Sam Pilgrim Lands on Xbox One