On May 8 our game Sin Slayers, a RPG in dark fantasy setting will be released on Xbox One. In it we decided to ironically play out all clichés of the genre. We are big fans of Diablo, Dark Souls, and Castlevania, these games conquer with the incredible atmosphere of a dying world. But we wanted to look at the genre from the other side and add some humour to the dark stories about the other worlds and the demons that inhabit them.

From the very beginning of the adventure, the player will lead an entire squad of chosen ones. It doesn’t matter that you found yourself in the mysterious valley just a few minutes ago. The whole world immediately calls for your help and asks you to fight not ordinary demons, but seven embodiments of deadly sins.

An ironic dive would be impossible in any style other than pixel art. Partly nostalgic, partly naive, it turns dark locations into a huge sandbox for adventurers. Thanks to visuals, the player will not have to take the battles too seriously, all of them will look funny and colorful. Fans of variability will be pleased with the choice of characters, skills and proper leveling system. There are many ways to win in Sin Slayers, but there are no “perfect recipes”.

You shouldn’t take the story too seriously either. Do you think inhabitants of the other worlds are tormented only by longing for former greatness? Sin Slayers has much more down-to-earth problems: shamans suffer from stomachaches, fierce monsters don’t like to be called fat, and mysterious traders will try to use you for their own gain. Every hero here tries to look mysteriously gloomy, which makes it even more funny.

Dialogues try to embody the main cliché of the genre – constant mutual threats. Sometimes too serious, sometimes too funny, we even tried to bring a little bit of cringe into the conversations. It seems that some dark entities should think better what they are talking about, because it is too funny.

You’ll definitely remember terrifying opponents! Overgrown mushrooms with many heads, giant wasps, zombie peasants with forks and shovels, even living tombstones. Each of them has a prototype from a serious game of the genre. Also be careful with chests, they can present a nasty surprise instead of treasures.

We hope that you love dark fantasy as much as we do and spot all references and Easter eggs that we have carefully placed throughout the Valley. You want to kill demons instead of looking for Easter eggs? Well, there are thousands of monsters waiting to meet you. Welcome to the Valley, sinners! 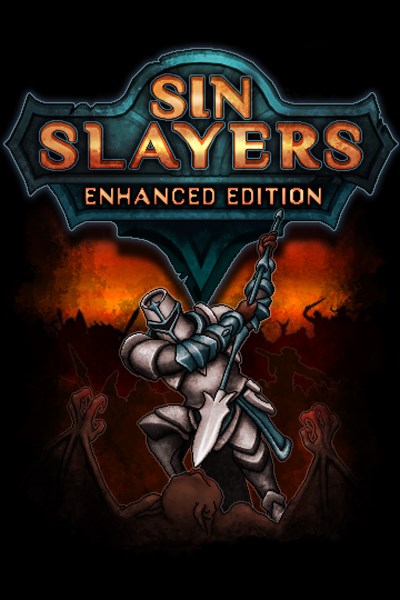 $15.99
Get it now
Sin Slayers is an RPG with roguelike elements set in a dark fantasy world, where your choices determine how challenging the fights and enemies will be.

Create, equip and lead a team of heroes. Each unit will have its own abilities and weaknesses, so plan your combat strategy accordingly. You’ll journey through stinking primeval forests, boneyards riddled with crypts and the graves of fallen warriors, and other places even the bravest adventurer would fear to tread.

Battles, traps, and bizarre enemies… Everything and everyone wishes to take your life, but don’t succumb to despair. Between fights your party can take their rest at a fountain, or while on the road in an old church which leaves its doors open to the weary and wounded.

Travel every path and byway of the Valley, obtain new weapons on the field of battle or by fulfilling quests, gather ingredients for magical elixirs and resources to craft armor and amulets. If a certain item is beyond your crafting ability, ask the blacksmith in the Old Church for help. The best gear will allow you to challenge the deadliest monsters.

Related:
Seven Arguably Interesting Facts About Arcade Spirits, Out Today on Xbox One
Next Week on Xbox: May 12 to 15
Join the Fortnite: Party Royale Premiere Party This Friday on Xbox One