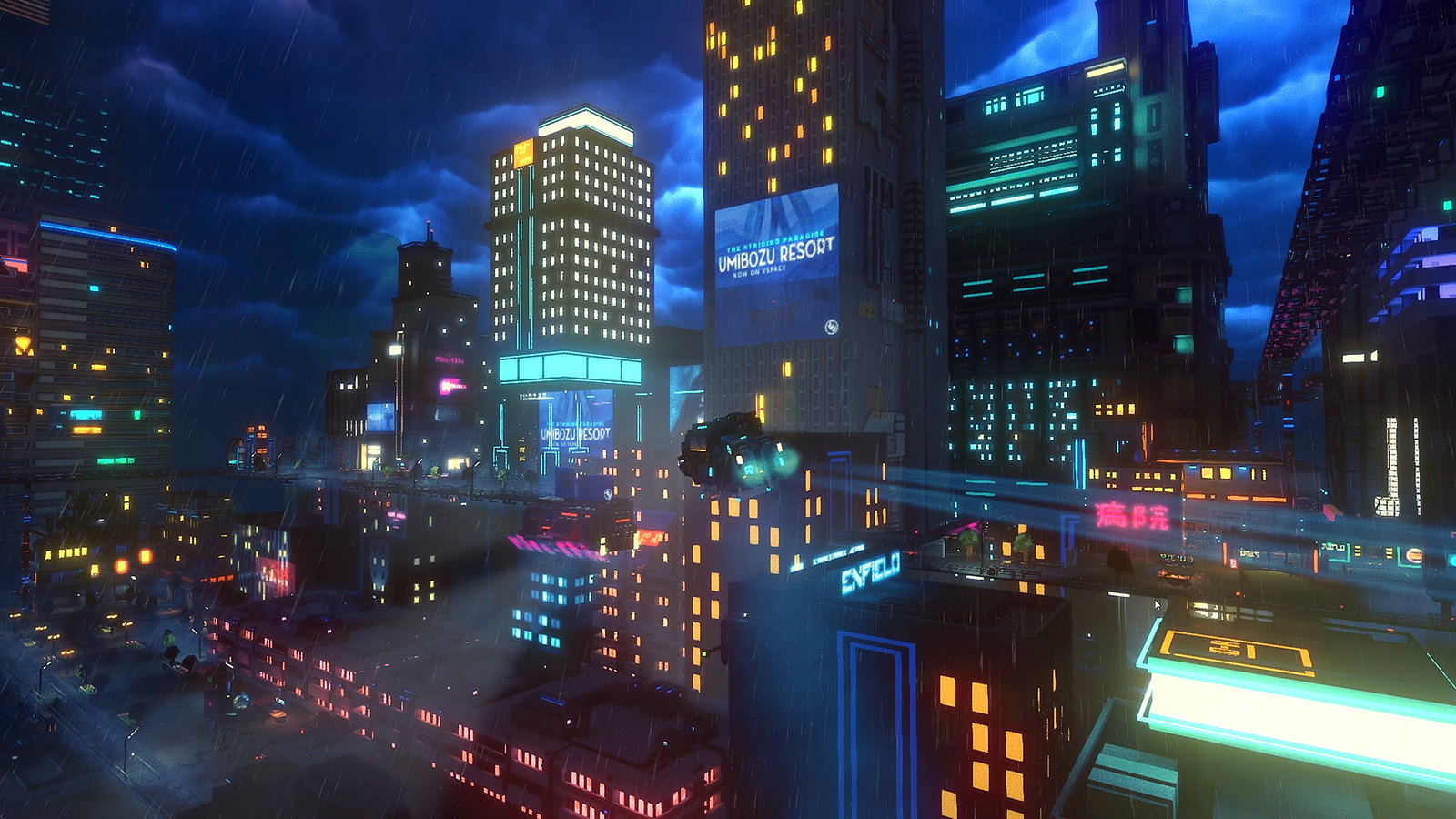 I’m Thomas Welsh, lead writer and narrative designer on Cloudpunk, and I created the characters you’ll meet in the cyberpunk city of Nivalis.

Since release, seeing players’ response to the diverse and colourful cast of characters has been a blast. Everyone has their favourite, and I’m really touched by how the community has taken these androids, humans, and cyborgs to heart.

Today I’m going to tell you about five of the most important people you’ll meet during your rain-soaked, neon-infused cyberpunk adventure.

When I first joined the project, Cloudpunk had a beautiful voxel world filled with flying vehicles, but no characters or plot yet. We knew Cloudpunk wasn’t going to be a typical cyberpunk story about grizzled cyborg cops or robot gangs shooting each other in the street.

Instead, we wanted to tell the story of a regular person living a normal life in a cyberpunk world. How do they pay their bills? Who are their friends and rivals? What is it like for them to work the nightshift for a delivery company, flying between buildings, meeting interesting people, and listening to a pulsing synth soundtrack? To answer those questions, we needed a hero. That hero was Rania.

Rania is an outsider, an immigrant and — most importantly for Cloudpunk — a good driver. Just like the player, she is new to the city and has a lot to learn. She’s clever and a little cynical, and she’s not easily manipulated or tricked. Rania doesn’t drink, but she connects with Nivalis through her love of street food. From cherry pie to dumplings, she’ll never walk past a food stall without checking out what is hot and cheap.

Rania’s call handler for the night is Control. He is grizzled and tired but laughs often. Control knows he shouldn’t get attached to his drivers as the job is dangerous, but he can’t help himself. His mysterious background is slowly revealed throughout the story. Control can’t wait for the end of his shift so he can finally open the bottle of sake he has waiting in his desk drawer.

Rania’s best friend is Camus, her dog-car. Camus was a robotic pet before they came to Nivalis, but Rania had to sell his metal frame to clear her debts. His personality is stored on a data drive and when she receives her first wage, Rania pays to upload his consciousness to her vehicle. He is cheery and helpful, but naïve. Camus acts as Rania’s conscience, often questioning her decisions when they are selfish or cynical. Camus doesn’t eat human food, but he is “food-curious.” He wants to try donut-coffee, though Rania is not sure that’s even a real thing. 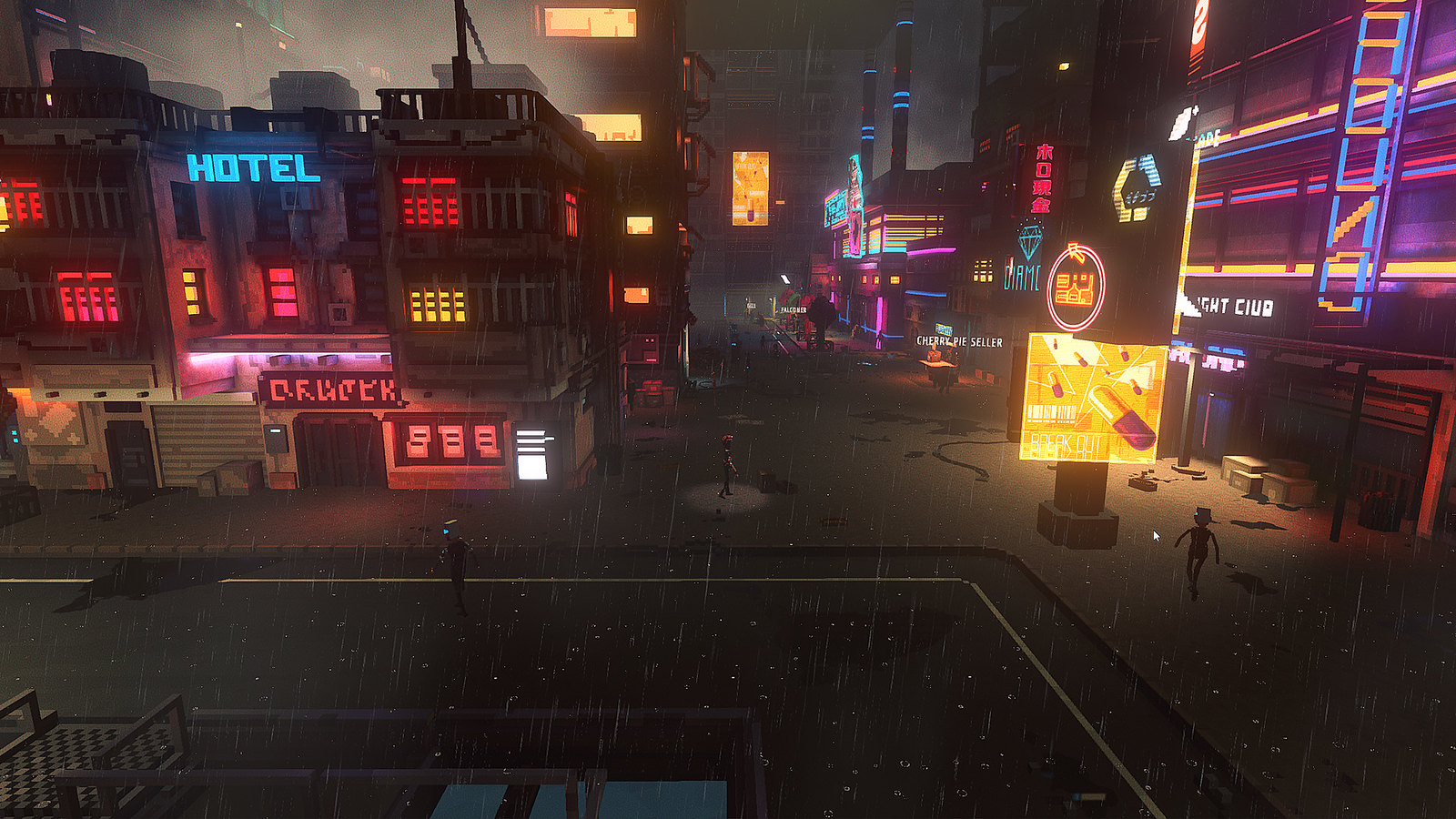 One of the weirder characters Rania meets during her shift is Huxley the android, and he has become a real fan favourite. Huxley is “Nivalis’ best, cheapest private investigator” and due to an overheating CPU, he speaks like he is narrating a noir crime novel. He eats anything, as long as it’s hard boiled.

Finally, we have Lomo, owner of the Sin Wave nightclub and local crime boss in Midtown. He helps Rania when she is detained by Nivalis’ authoritarian police force CorpSec, but in return he demands a favour. As Lomo says to Rania, “Your hands are too clean.” They won’t stay that way. Lomo’s drink of choice is expensive whisky.

These are just a few of the fully voiced characters you’ll meet in Nivalis. I can’t wait for a whole new batch of players to join us for their first shift when we launch Cloudpunk on PlayStation on October 15 this year!