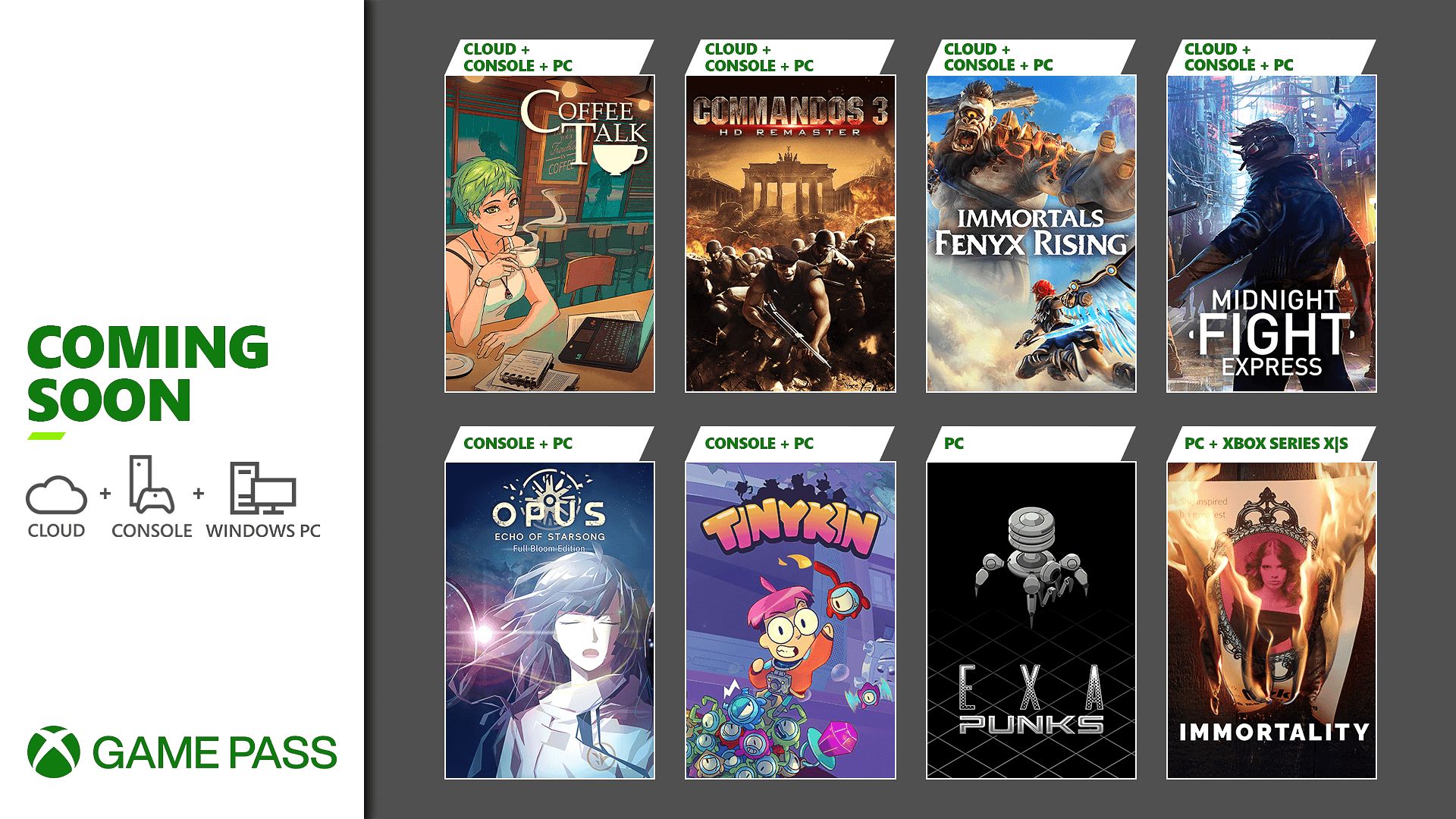 My favorite part about announcing games coming soon to Xbox Game Pass is that feeling where you know you’re about to make someone’s day. Sharing ‘coming soon’ details about a new game they’ve been excited about (you can catch me playing Immortality on launch day), one they’ve never heard of that might become their new favorite, or a beloved classic they get to play again. We’ve got all of these and more for you coming soon to Game Pass (and maybe some more surprises later this week) so let’s jump in!

Coffee Talk (Cloud, Console, and PC) [email protected]
Coffee Talk is a coffee brewing and heart-to-heart talking simulator about listening to the stories of alternative-Seattle’s inhabitants. From a dramatic love story between an elf and a succubus to an alien trying to understand the lives of humans, help everyone you meet by serving up a warm drink or two. Plus, Ultimate members can jump right in with Touch Controls via Xbox Cloud Gaming today!

Midnight Fight Express (Cloud, Console, and PC) [email protected] – August 23
Available on day one with Game Pass: A former member of the criminal underworld is lured back into “the life” by a mysterious drone claiming they only have until sunrise to prevent a citywide criminal takeover. Engage in a brutal and hyper-kinetic brawling ballet, using every environmental tool and street fighting technique at your disposal. Level up your abilities to take down the mounting onslaught of bozos, cronies, and crime lords.

Exapunks (PC) [email protected] – August 25
The year is 1997. You used to be a hacker, but now you have the phage. You made a deal: one hack, one dose. There’s nothing left to lose… except your life. Exapunks is the latest open-ended puzzle game from Zachtronics, the creators of Opus Magnum, Shenzhen I/O, TIS-100, and more.

Immortality (Cloud, PC, Xbox Series X|S) [email protected] – August 30
Available on day one with Game Pass: Marissa Marcel would have been a star. She made three movies, but none of them was ever released… and then Marissa Marcel disappeared. Explore lost footage, cut your own path into the mystery, and discover what happened to Marissa Marcel in the newest interactive game from Sam Barlow, creator of Her Story.

Tinykin (Console and PC) [email protected] – August 30
Available on day one with Game Pass: Milo arrives on Earth to find that he’s way too small, everybody’s gone, and a day hasn’t passed since 1991! Team up with the mysterious tinykin and use their unique powers to create ladders, bridges, explosions, and a lot more! Find a way home through a sprawling ant-sized metropolis and unravel Earth’s biggest mystery!

Naraka: Bladepoint – Showdown – Available now
Showdown is a whole new cooperative campaign mode coming to Naraka: Bladepoint on August 5, available to players as a free update on Xbox Series X|S and via Xbox Game Pass. Players will team up, fight against ferocious enemies, and upgrade heroes to face challenges of varying difficulties.

Sea of Thieves: A Hunter’s Cry – August 18
A rescue is underway! Sail into the Sea of the Damned to join forces with other crews, reach the peak of a transformed, twisted tavern and save Merrick in A Hunter’s Cry, Sea of Thieves’ sixth time-limited Adventure running from August 18 to September 1!

Ultimate members, 16 more games are available now with touch controls via Xbox Cloud Gaming! Jump into these games at xbox.com/play via browser, Xbox Game Pass app for Android, or Xbox app for PC – no controller required!

Set some time aside to jump back into the following games before they go! As always, you can save up to 20% on your purchase of these games to keep them in your library.