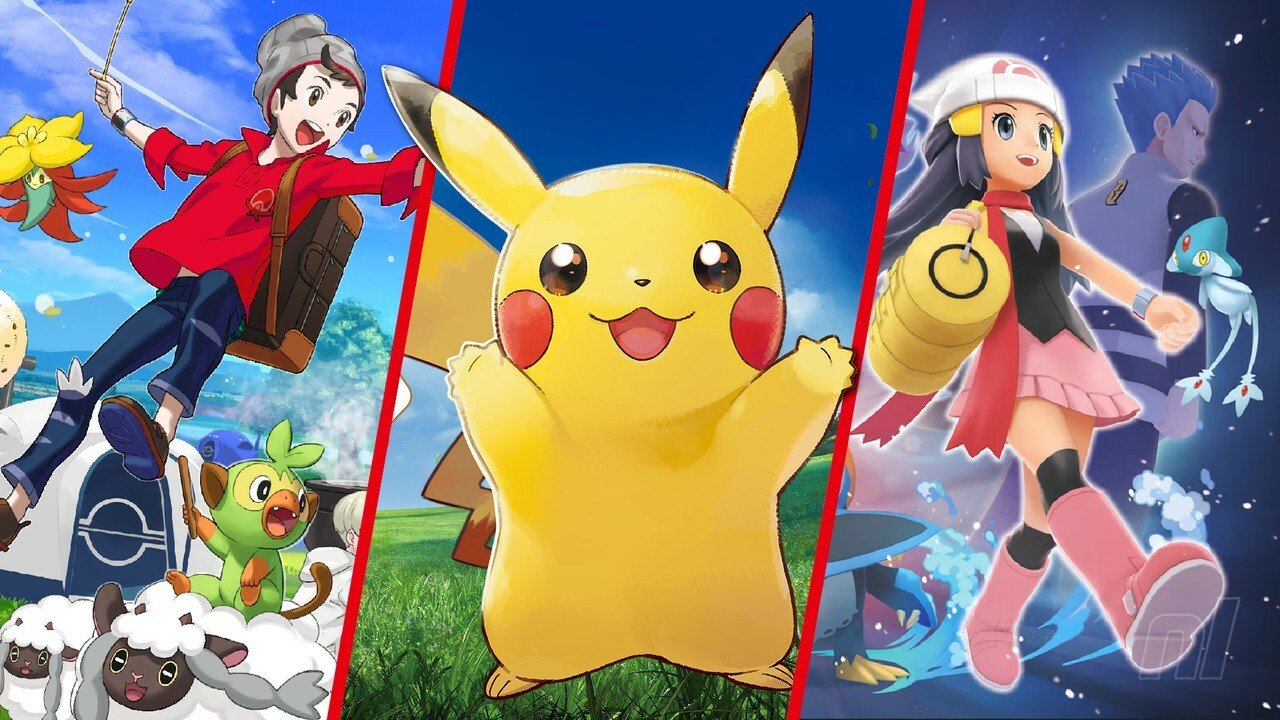 What are the best Pokémon games? Ranking such classics proved difficult given how many of them end up being among the best games of their particular console generation. So we decided to modify our existing ranked list and ask Nintendo Life readers to rate every game in the series — and this is the result!

To be clear, this is just the mainline entries; the games that introduced a new generation of Pokémon to the mix, their sequels, the ultimate versions and the remakes of those games, including the most recent, Pokémon Brilliant Diamond and Shining Pearl. Non-mainline spin-offs aren’t included here, though — sorry Pokémon Smile fans.

Similar to our other reader-ranked lists, the order below is governed by each game’s User Rating in our games database, and as such is subject to fluctuation even after publication. Registered Nintendo Life users can still rate the games now simply by clicking the stars next to the titles listed and giving the game(s) a rating out of 10. Think there’s a game that deserves to be higher up? Get rating and you may very well affect the order below in real time.

So, read on to find out the very best mainline Pokémon games ever, according to you lovely people…

And if this list has made you feel all warm inside about the series, then feel free to redress the balance with this list of 11 times the Pokémon series was really evil. Kinda.

While some of the slower elements of the original games have been fixed in Pokémon Brilliant Diamond and Shining Pearl, and The Grand Underground makes up for the comparatively weak Pokédex, the new art style and a few other stumbles make this pair of games a somewhat disappointing retread of Generation 4. If the remit of these remakes was to remain faithful to the original Gen 4 pair, we wish they’d also stuck to the pixel-art aesthetic.

These Brilliant and Shining remakes stick very closely to the original template — which some players will no doubt welcome — but aside from The Grand Underground and the connectivity with the current games in the series, there’s very little reason to play Pokémon Brilliant Diamond and Shining Pearl over your original DS copies.

Pokémon: Let’s Go, Pikachu! and Let’s Go, Eevee! are beautiful reimaginings of a video game classic, updating a 20-year-old game in ways which make it infinitely more accessible and user-friendly for a modern audience, while keeping the magic first discovered all those years ago. On the downside, the motion control mechanic is fun but flawed, forcing you to shift from one play style to another to get the best experience. Still, the game does a superb job of striking a balance between being an easy route of entry for newcomers and offering just enough post-game challenge and competitive play elements (and nostalgia, of course) to please series veterans; as a result, these new titles really do offer something for everyone, which can’t always be said of the mainline Pokémon entries. They might not be an absolute masterpiece, but we’d urge any Poké-fans out there to give these ones a go.

Pokémon Sword and Shield succeed in bringing some new ideas to the table, although there are areas where it could be pushed further. What’s done right is done right, but there are also elements that feel like they’ve come from a decade-old design document. There are moments contained within that are the best the series has ever been, but this joy is occasionally spoiled by contrasting moments that left us disappointed. It’s an experience full of highs and lows, from the unadulterated wonder and joy of seeing a brand-new Pokémon in a stadium full of cheering crowds, to the monotonous and dragged-out dialogue we just wanted to skip. The wonders of exploring the Wild Area feel like the true evolution of the series.

On the whole, Pokémon Sword and Shield were a very solid start to the HD generation of Pokémon games, although there’s room for improvement.

With X/Y and Omega Ruby/Alpha Sapphire, 3DS already had some excellent Pokémons to its name, but Pokémon Sun and Moon felt like a new start for players who had perhaps fallen off the RPG collectathon bandwagon. With improved character models and customisation, plus the addition of powerful Z-moves, the return of fan-favourite Gen I pocket monsters in new Alolan forms helped enthuse the franchise faithful as well as people who can only reliably recall the first 151. Extra forms, moves and activities in these Ultra editions make them the most ‘complete’ variants.

Although it’s a shame we never got to see our favourite monsters in stereoscopic 3D, this is the crème de la crème of traditional-style Pokémon on 3DS.

Pokémon Sun and Moon are some of the best Pokémon games that Game Freak has ever produced. Poké Pelago, the side quests, the absolutely stunning nature of the presentation, it’s all a sheer joy from start to finish. Game Freak managed to carefully balance the inclusion of new mechanics without totally ruining things for the most hardcore fans. It’s got content coming out of its ears, a much more interesting story than some previous efforts, and it rewards exploration in a way no other title in the series had to that point.

Whether you’re a Pokémon fan new or old, this should be in your 3DS library.

Game Freak hit the nail squarely on the head once again with Pokémon X and Y. A wonderful blend of excitement and nostalgia, it evolved the core series with its impressive polygonal 3D environments and masterful camera angles, adding a few technical adjustments along with a brand new Pokémon type to the original formula that we all know and love. It’s not quite a revolution, no — and is hindered slightly by the meagre use of its host platform’s glasses-free 3D capabilities — but X and Y are a very fine pair.

Doing our best to avoid spouting Prince lyrics, what is there to say about Pokémon Diamond & Pearl? The core experience holds up as well as it ever did and, at the time, these were the greatest Pokemon games ever created. As with so many video games successful enough to spawn a never-ending series of sequels, each entry is destined to settle beneath its successors, compacting down with the passing of time until they’re mere fossils — worth collecting, treasuring and remembering, yes, but worth playing when they’ve been iterated on umpteen times since?

That’s a tough question to answer, and we suppose it’s the price of success and progress, but while Diamond & Pearl might not boast the refinements we’re now accustomed to, they’re still excellent Pokémon games and deserve to be taken off the shelf and actually played with once in a while. They’re sure to make you a happy boy or a girl.