A couple of weeks ago I downloaded the Army of 2 demo (Xbox 360), played it a few times and thought I need to get this game! The demo was cool and I thought it was going to be a great game.

I finally got the time to pick up a copy this weekend and started playing. After a quick update it became apparent that we had to go through the whole demo again since there is no way to bypass the training. 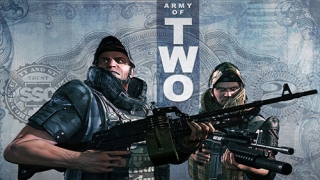 What really makes this game unique is the fact that you need to have two players and the dependence you have on your teammate. While I have played several online games that are multi-player like Call of Duty, Halo and Rainbow Six they are usually a bunch of individuals on the same team. Army of Two makes you depend on your team mate to cover you and to distract the enemy.

The graphics are good and the videos help to tell the story as you move through the campaign. It’s a little frustrating to have to go through the videos after each mission and not be able to bypass them, but they aren’t as long as some games like Assassins Creed which drives you nuts.

One of my favorite features in the game is Overkill, this is when your teammate has all the Agro for an extended period of time the game prompts you to click into Overkill mode.

Overkill mode changes the speed of the game to a crawl and doubles your killing power which leads for some cool effects when you shoot the enemy. This is critical during certain parts of the game when you are fighting 20 enemies at once. L’Abattoir and Running Man are a couple of unlockable acheivements that you can get by getting kills in Overkill mode.

After about 6 – 8 hours I made it through the game, I thought it was a bit repetitive and needed some more challenging game play.  Going back in the more difficult modes was much harder and playing with the recruit partner became a little difficult as he would abbandon you going towards the mission and leaving you to battle with the current attackers.

I was thinking that the on-line play would be interesting, but the couple of times I tried to play there was nobody on-line, so I’ll have to get back to you on that!

I would probably rate the game an 7.5 out of 10.  Hoping to get some online game play going….