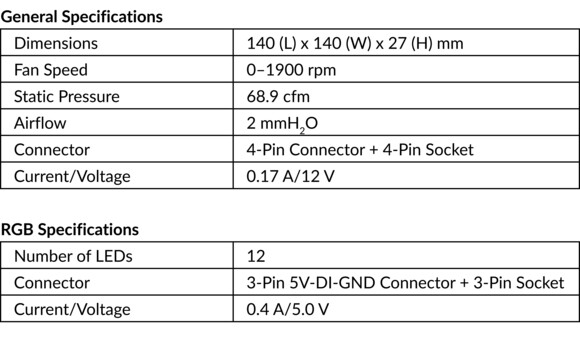 ARCTIC, one of the leading manufacturers of low-noise PC coolers and components, expands the RGB fan portfolio with 140 mm variants of the P-series with PWM PST. The P14 PWM PST A-RGB 0 dB and P14 PWM PST RGB 0 dB are available starting now as single fans as well as in a three-fan bundle. The PWM fan control enables dynamic speed adjustment. At low load, the case fans automatically switch to silent passive mode.

With 12 RGB-LEDs and the ARCTIC P14 fans, the case will glow in the color of your choice; in the A-RGB version, there are virtually no limits to the lighting effects. The P14 PWM PST A-RGB and RGB have tested compatibility with the (A-)RGB standards of leading motherboard manufacturers and are therefore interoperable with their connectors and software. This makes installation and configuration especially easy. The P14 PWM PST RGB 0 dB is available in the Value Pack with the software-controlled ARCTIC lighting controller, which allows freely configurable LED modes in addition to numerous presets.

ARCTIC P-fans are designed for high static pressure with their curved fan blades and generate a focused airflow even with increased air resistance, which reduces the PC temperature efficiently and quietly. Alternatively, the fan lighting can be controlled via an external controller. This makes them equally suitable as case fans and for use on heatsinks and radiators. Synchronous speed control of multiple fans is provided by PWM Sharing Technology (PST).