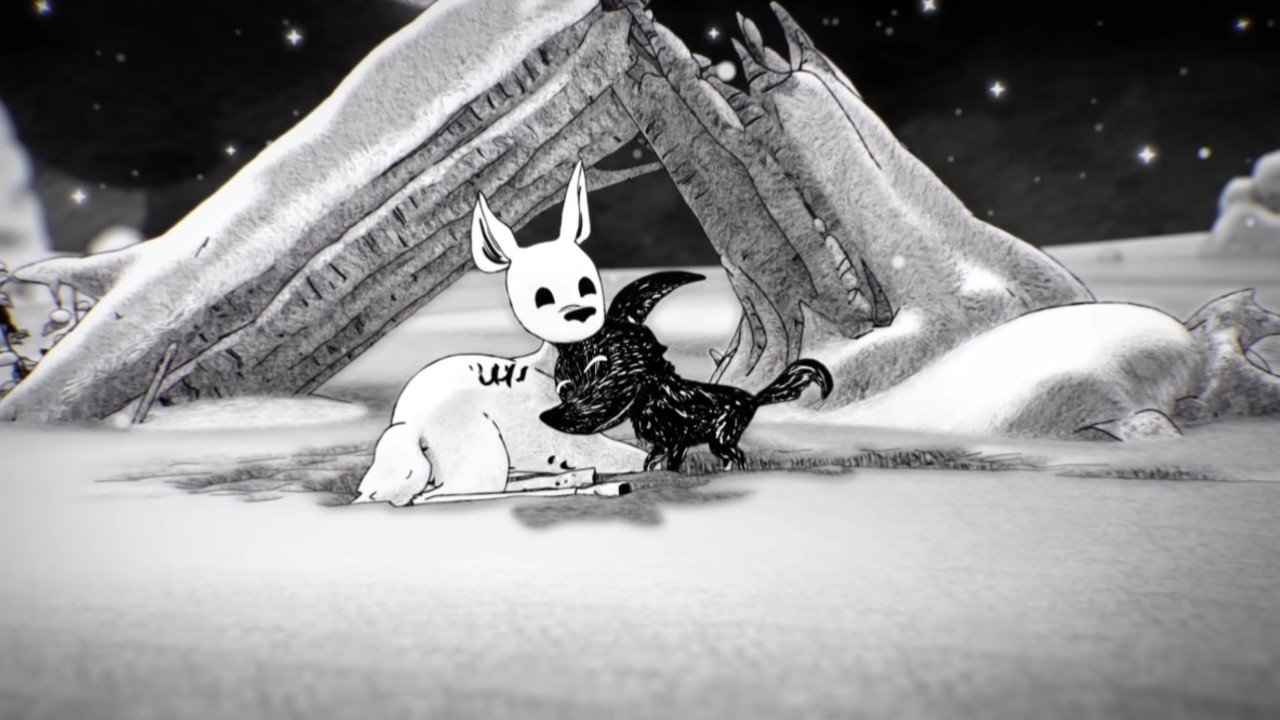 During June’s Nintendo Direct Mini, you may have seen a game that looked a little bit like heartbreaking Disney flick The Fox And The Hound — except instead of a fox, it’s a wolf, and instead of a hound, it’s a deer. This was Blanc, a gorgeous, monochrome, hand-drawn game from French studio Casus Ludi, coming to the Switch in early 2023.

We sat down with Casus Ludi to find out more about this gorgeous co-operative adventure, focusing on the two adorable protagonists, and whether we can expect to cry just like at the end of The Fox and the Hound…

Nintendo Life: Hello! Thank you for speaking with us! Can you tell us in your own words about what Blanc is about?

Casus Ludi: Blanc is a cooperative experience for two players. As a wolf cub and a fawn, they will explore a snow-covered world in search for their respective families. In normal circumstances, these animals would be predator and prey, but as they are both young and lost their best option is to work together to complete their journey.

It’s a contemplative game that you can play with a loved one, made to connect players as they enjoy a quiet and cute story.

Is there any dialogue in the game, or is it entirely wordless? If the latter – how do you convey emotions without text?

There is absolutely no dialogue or written word to convey the story. The only texts are the controls tutorials. We rely on visuals, animations, sounds, and music to communicate the story and the emotions, like in a silent movie. You’ll find small breaks and moments in the action where the characters briefly interact that help develop their connection to each other.

Can you tell us about the unique abilities of the wolf and the deer?

While we won’t go into that too deep right now, we can say that both animals will need to utilize their specificities to help each other along their journey to find their way home.

Do the wolf and the deer have names?

No, they don’t, they are animals in story told from an animal perspective. One of our objectives was to keep the narrative, and the characters, with minimum anthropomorphism.

Did you study any particular sources of animal behaviour to create the wolf and deer’s animations and behaviours?

Our animators worked with documentation and videos to make both animals believable, even with their stylized morphology. We also worked from start with an ethologist [a scientist who studies animal behaviour] to inspire us to build and characterize those two animals and bring them to life.

Did the real-life personalities of wolves and deer influence the game’s story in any way?

In a way yes, but it’s not a documentary! We keep things believable, even if extraordinary. So, our protagonists behave as two young animals, lost and curious, but the story sometimes rules over the realism here.

What does a typical day making this game look like?

Depends at what stage of the project and for whom in the team. It’s more or less the same as for any video game development team.

The Casus Ludi team is complemented by a wide range of freelancers, and we are all currently working remotely. We have a weekly meeting with everyone, and then calls as often as needed for briefs, reviews, and playtests. So, we’re all alternating between working alone and on calls with people we specifically work with.

What is it that drives you to create on a day-to-day basis?

Once again, I guess everyone in the team could have a different answer to that. That being said, we’re all committed to deliver a game that we’re proud of. We’re also strongly motivated by our teammates. When it’s a pleasure to work with your colleagues, you always find yourself motivated.

Lastly, for some of us, it’s a first experience at developing a video game, and even after all this time it’s still exciting. Personally, I have learned a lot about video game development and about myself during this production. Learning is a strong motivator that drives me each and every day.

How did you assemble the team on Blanc?

We started Blanc in 2018 at a game jam during where we created the first prototype of this adventure. At the time we just composed the team with people that had experience working on game jams together, but we also invited friends that were new to this experience and curious about it.

We wanted to try something with a specific visual style, and that’s why we choose to work with Raphaël Beuchot, who is a cartoonist and illustrator. He’s a friend of Rémi Gourrierec, the game and creative director on the project, who was also a cartoonist and [screenwriter] before getting invested in video game development through game jams. Then, when the project became a real video game production, we hired people to complete our needs in specific skills.

What sources do you draw on for inspiration?

There are so many things from this game that have come from some sort of inspiration! The story and game design are inspired, among other things, by other games, movies, and books. The art style stems initially from Raphaël’s wish to come back to black and white drawing and his childhood memories of snowy landscapes.

When it comes to music, Louis Godart immersed himself into piano music, inspired both by early 20th century French music but also contemporary Japanese composers. Part of the inspiration also came from the game jam theme -perfect storm- which we twisted into, “what story can we tell that starts just after a perfect storm.” On top of that, the game jam environment helped inspire our thoughts as we were all located in a very snowy Quebec City.

Why did you decide on the black-and-white aesthetic for Blanc’s world?

As I mentioned above, Raphaël wished to make a project in black and white, simply drawing with a pencil. With the choice to go for a world covered in snow, we quite quickly decided to embrace the black and white constraint to share our story.

Should we be worried about what happens when the wolf cub and fawn finally find their families, who will be predator and prey?

We don’t want to give too much away, but one of the guidelines for the narrative was to have a story without antagonism or violence. We want to provide a fulfilling experience based on positive feelings like empathy and cooperation.

How were the sounds of the two animals recorded?

This is our sound designer’s secret! What I can tell is that Pierre-Marie [Blind, sound designer and foley artist] often talks about using unlikely props in his studio, like cooked coconut meat and ground coffee for the fawn’s steps, to produce specific noises. He also took risks into the wild to record nature’s sounds, including a time where he almost fell with all his equipment into a frozen lake!

Is Blanc going to make us cry like The Fox And The Hound did?

Just like the above, we don’t want to give too much away. Players will experience a lot of touching moments where the characters interact as they travel through the story. We’re truly excited to see which moments will impact our audience the most!

I really wanted to rely on the silences to make every music event really count, but also to allow sound design to be a strong storyteller

Can you tell us about the music?

I’ll let Louis answer this one, as I’m not educated enough about music.

Louis Godart: First of all, I really wanted to rely on the silences. This is to make every music event really count but also to allow sound design to be a strong storyteller.

Stylistically speaking I drew inspiration from early 20th century piano music by French composers like Claude Debussy and Lili Boulanger, which is an aesthetic I feel we seldom encounter in video games.

At the same time, I couldn’t refrain from incorporating the passion I have for Joe Hisaishi and the works of Hajime Wakai, Manaka Kataoka, and Yasuaki Iwata, particularly the soundtrack to The Legend of Zelda: Breath of the Wild, which really turned the table upside down when it comes to the density of music in relationship to gameplay. The music is also adaptive, meaning I relied on tools that allowed me to make the music naturally react to the progression of our characters.

Thank you to Casus Ludi for speaking with us! Blanc is due to release on Switch in Q1, 2023.

Is Blanc one of your wishlist games? Did you cry at The Fox and the Hound? Tell us your thoughts in the comments.